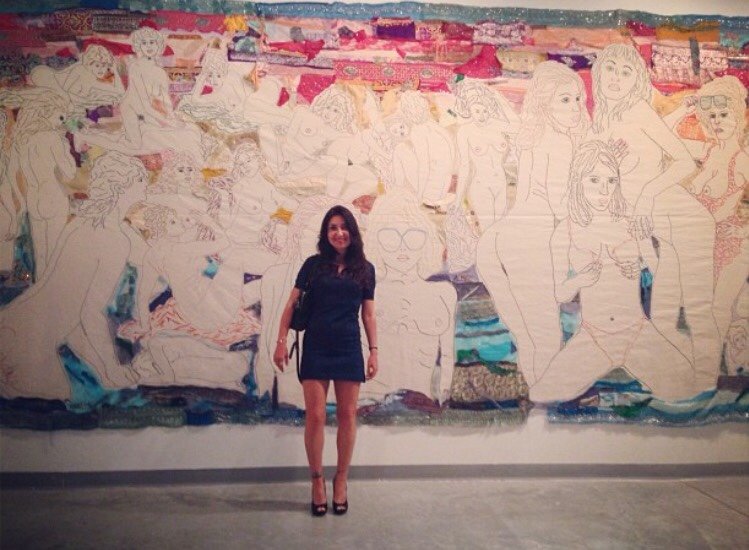 Born and raised under a junta on the isle of Lesbos, Greece, Eurydice ran off to America at fifteen. She learned early on that history—from war to invention, from philosophy to theology—happens on the bodies of women, often literally (in the form of mass rape and abductions of women as spoils) and always metaphorically. Whether elevated like Helen of Troy or Maria Magdalena, or vilified like Helen of Troy or Maria Magdalena, women signify passion, redemption, war spoils and conquest, and have been used to justify major events in history. The ubiquitous bodies of women, as mothers, as beloveds, as artists’ models and poets’ muses, as objects of beauty or terror, reverence or disgust, have been the single consistent metaphor of Eurydice’s artistic evolution. The idea of woman encompasses the continuous ambivalence toward life (and sexuality and mortality) that initiates and then sustains the male aesthetic domination of art and literature. Eurydice has explored this theme and only this theme in fiction, poetry, nonfiction, and in filmmaking, painting, drawing, printmaking, collages, installations, and, most recently, out of respect for the traditional unrewarded arts of women throughout history, in hand stitching. By temperament and ideology, Eurydice practices the synergy of artistic media and incorporates the lessons from each medium in her overall oeuvre. She is interested in opening up new venues of expression and subverting familiar modalities of paradigms that have been co-opted by patriarchy and late capitalism in order to present an alternate reality which she hopes will be more faithful to women’s interior lives and psyches. Her art centers on lifting the veils, layer after layer. Apocalypse means unveiling in Greek. 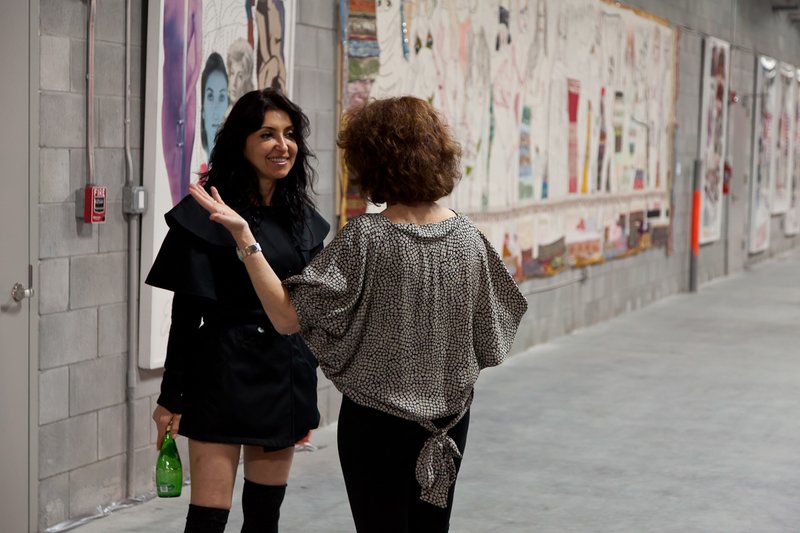 On the year of her last book publication, ten years after she began writing professionally, while living in NYC & wintering in Miami Beach, Eurydice found out that she was pregnant. She was writing a monthly sex column for Gear magazine and preparing to go on a book tour. She chose to raise her child in sunny Miami Beach, resisted offers to write a book on A Year in the Life of a Pregnant Sex Writer, and instead applied for and was awarded by a jury of artists prime studio space at the Art Center of S. Florida on Lincoln Rd in Miami Beach. For the next ten years she worked exclusively as an artist and her career change coincided with the arrival of Art Basel and the artistic renaissance it brought to Miami. Her artwork was bought by major collectors and museums and she was regularly commissioned by private businesses. She gradually turned her attention to embroidery, an ancient feminine craft that brought together her Eastern and Western heritages and which she turned into feminist avant-garde art. Following her 10-year retrospective, with her daughter now older, she resumed writing, just as Syrian refugees inundated her native island. This experience gave her the framework she needed to ground her story of the refugee experience to the 21st c. internet-centered present time and in the process reinvent the ancient Greek tropes that inform her take on the world.

AN INTERVIEW WITH EURYDICE:


Tell me a little about yourself. 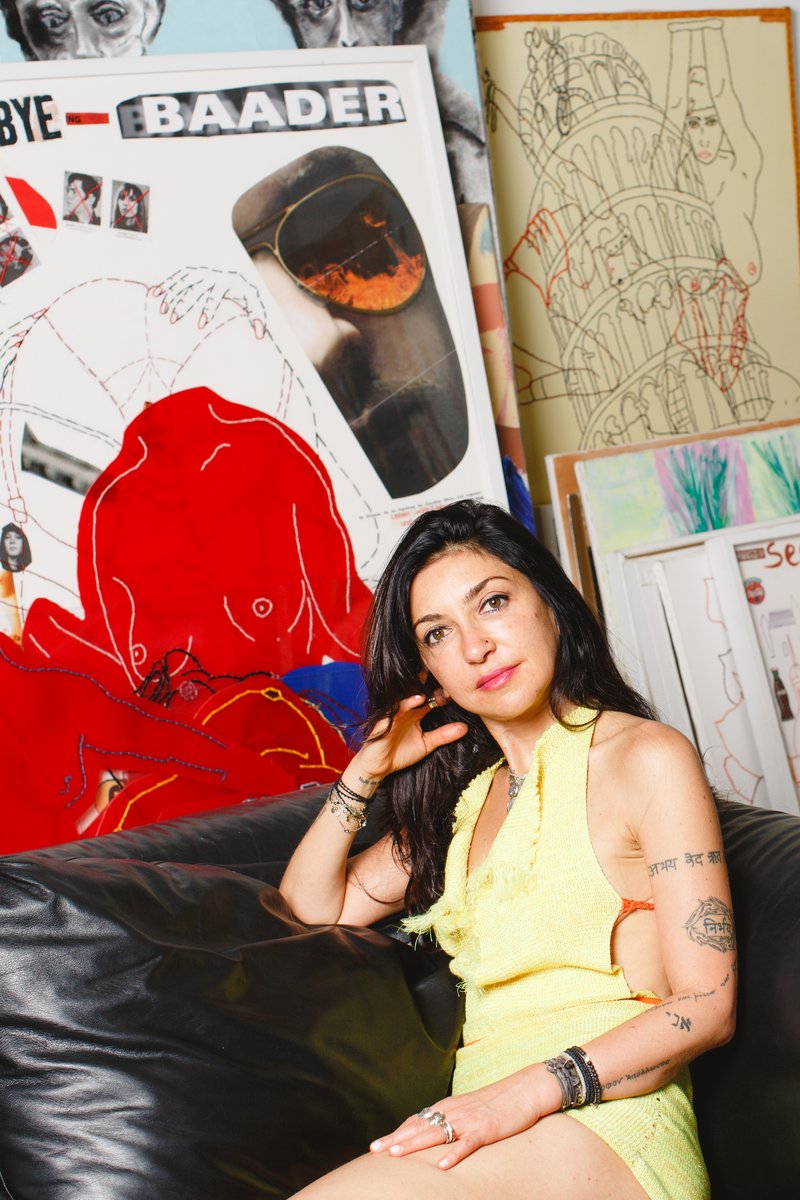 I am a dangerous artist. I feel I have to work where I'm at risk, where I am out of my comfort zone, where I am not me as my little dogs know me. If I don't break the rules that I have been taught, I do not see the point of making anything. Since I do not work to make money, I need an equally driving purpose to keep working rather than lying on the beach. The high of fear, of going too far, of not being able to control the consequences of my actions, of flying off the handle, as is the expression, excites me & compels me. I must create something slightly threatening to myself. The inspiration starts with the centrifugal forces between my fears & my fearlessness. I create to overcome the bonds & bounds I've inherited, to leave myself & become a voice for the (female) human condition. It started with my being born on Lesbos. I was born on the very beach where Sappho jumped off the cliff into the sea. That's the same beach where the ashes of Orpheus, acc. to the legend, were washed off after he was killed by wild maenads & dismembered. It's a special place, you might say. I was a Lesbian in a very conservative Eastern & Southern European culture, which is seen as the cradle of the West. Weighty heritage. My relationship with that word, whose meaning was bastardized by a simple accident of birth of the poetess Sappho in 700BC, affected my sense of self. I always thought I might end up being burned on a stake in the middle of a town square. Sexuality became my metaphor of choice at an awfully young age before I knew what it meant.

What type of subject matter do you like to use in your work? 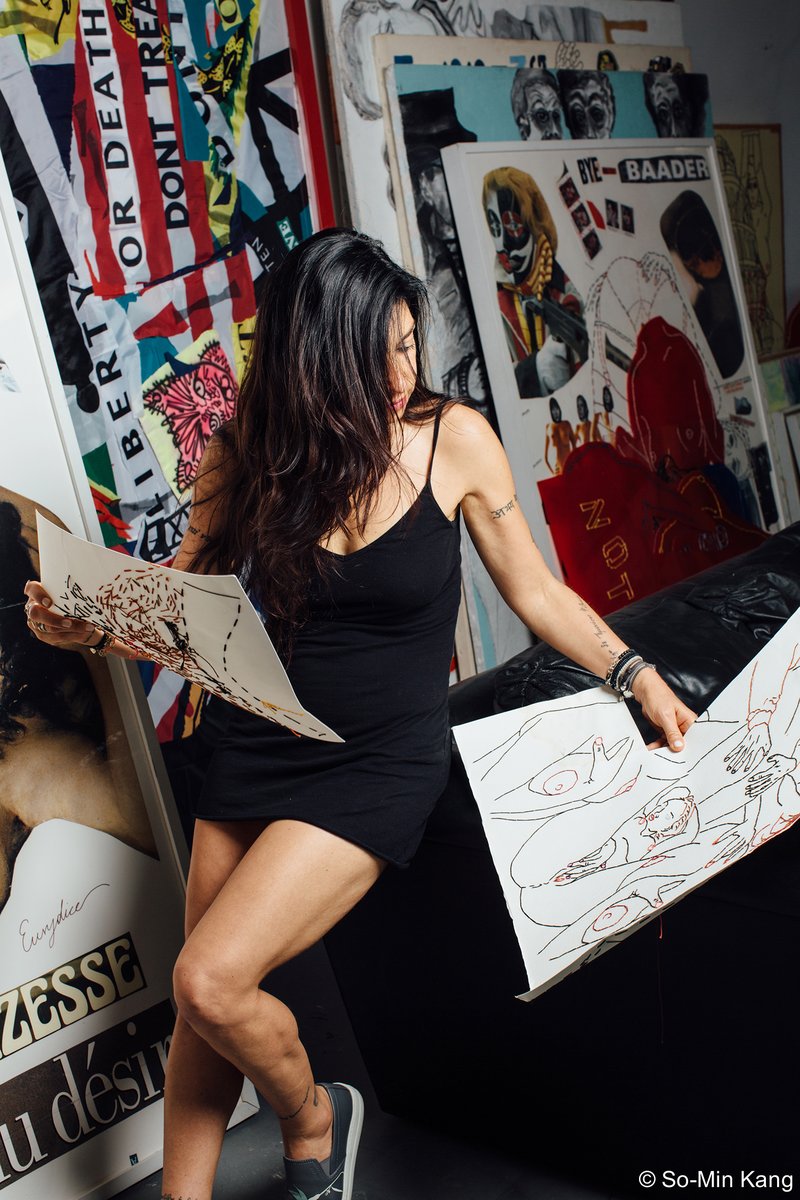 It starts at the mystical and intuitive and even impulsive level and I allow myself to be consumed by that, this urge and inspiration to make something. It's not a vision so much as something that comes from the heart, it’s winged, I believe in the muse. The artist is a vessel. You have to stop being yourself as the world knows you in order to create. It's an out of character experience. My actual thinking comes in at a much later time.

How important are words and typeface in the themes of your work? Why? 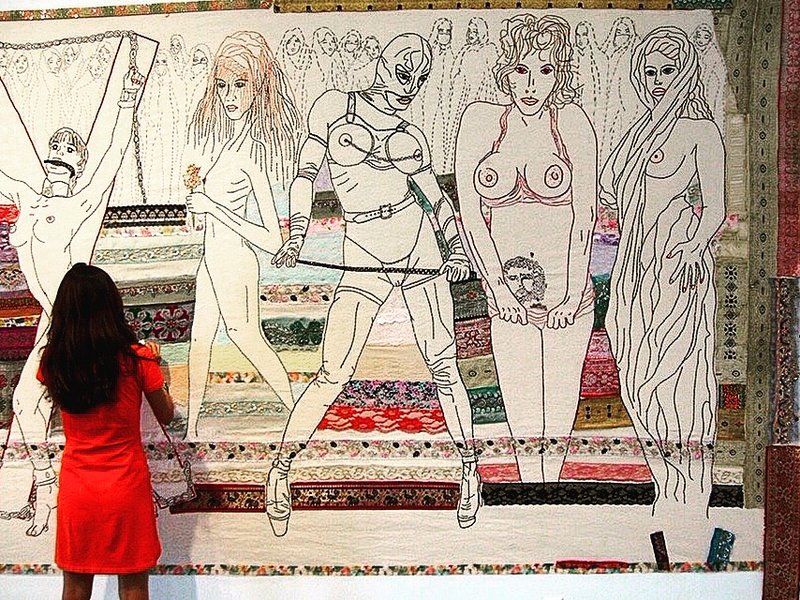 I use words in all of my visual work. I use text of some kind. All the work comments on some aspect of the culture. The words add that necessary layer to turn the screws, obfuscate and clarify. The visual work comments on the language at the same time the language comments on the visual work. I'm trying to reveal that the image vocabulary could be replaced by words to the same effect. The composition, where the words go, is very important. Every work has a textual message, intended to 'translate' the woman into generic language, while they pose mutely. Some texts are in dead tongues salvaged in fragments excavated out of the Egyptian desert--ranging from the oldest Greek writing in Linear B dating at 2000 BC to poems by the Lesbian Sappho from 600 BC--some are political slogans, and some are advertisements. I use them as street graffiti--a sister illegitimate art, the in-your-face art form of which embroidery is the closeted twin--to assert the co-existence of power and desire, exposure and elusiveness; to reclaim the complexity of the female experience.

Can you comment on the way you combine your materials and what these combinations convey?

The main subject is the relationship between propaganda, power, entertainment, and eroticism...tugging the heartstrings of the viewer. I try to recombine elements in a way that adds depth and shows the inner workings of that system, that whole system of propaganda, turning it inside out, to see how it controls you.

I am interested in the lyricism and sensuality of form (and stitch) juxtaposed with the speed and illustrative flatness of pop modernity and mass-market culture. By embroidering erotically charged images of women captured in positions of powerlessness and extreme exposure, in compositions whose public nature is enhanced by stencils and tags, I want to out the invisible. 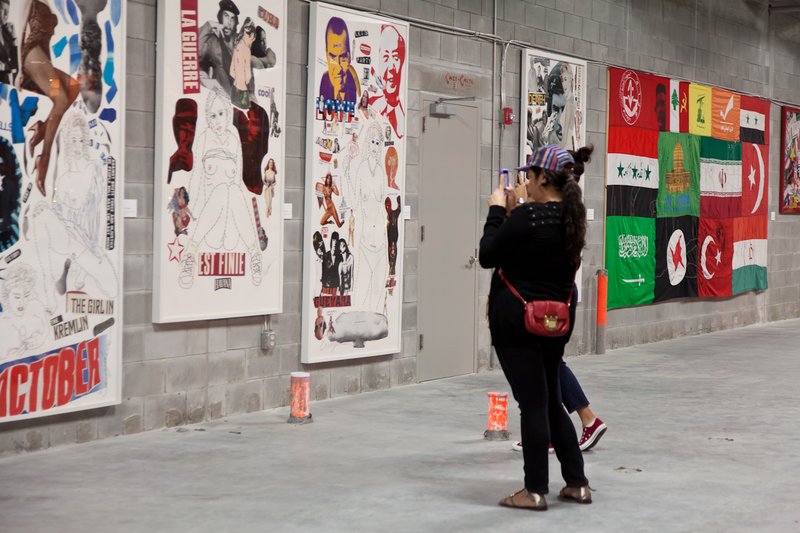 Can you describe your use of figures, symbols and mythological references in your work?

I use mythological references in my work to enhance the pop culture element with substance & space. I think in mythic terms. My worldview is Greek & mythopoetic. Every character becomes a god or a myth.

Are there any symbols that have a particular resonance with you? Why? 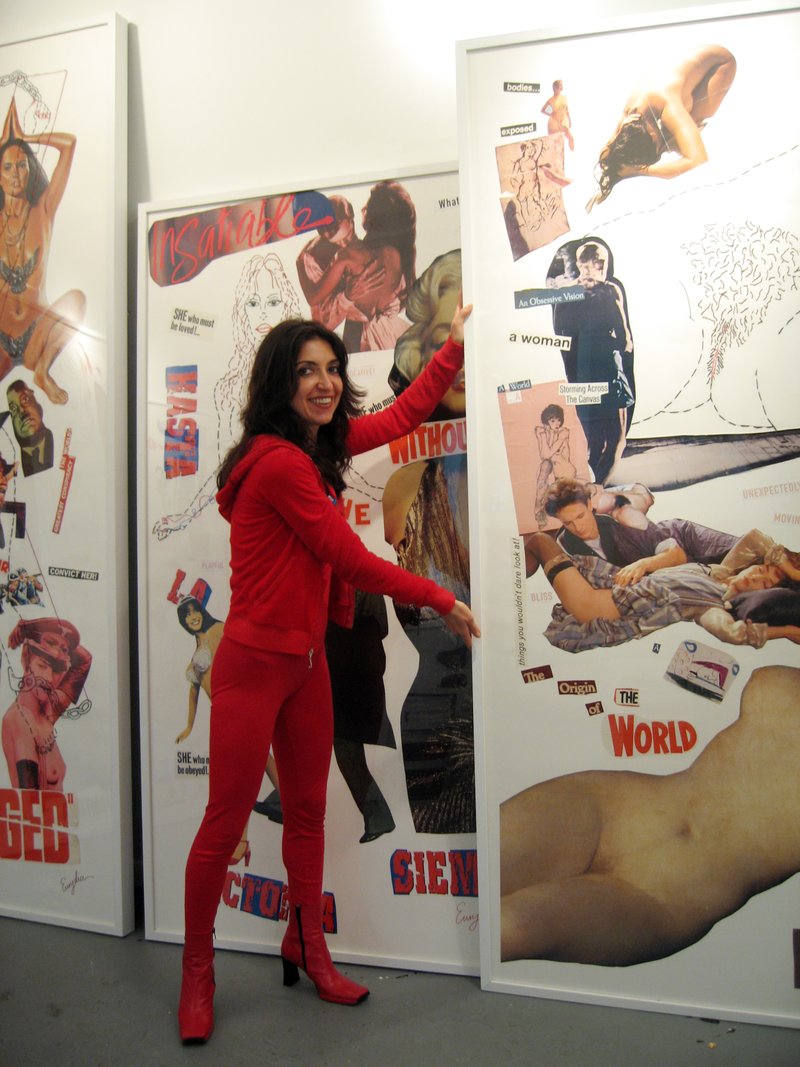 The female body is a central symbol in my work. The forbidden is a central motivation. I have adolescent fetishes, like Brigitte Bardot & Che & Charlotte Rampling, that recur in my work in allusion to the 60s which I feel was the decade that the west could have changed direction but failed to. I 'invade' women's privacy for political rather than pornographic purposes, in my effort to turn the female repressed into the irrepressible. I like needlework because it has been women's communal form of expression & exchange. I build a landscape of memory & tenderness, with the female body as the ideal home.

Do you have a picture in mind, and then search for the appropriate elements? Or are the pieces, such as your collages, dictated by what elements you happen upon?

I always draw images, compulsively you might say, on big pads I carry. As a result I have a stream of images available. I feel drawn to explore a new medium every couple of years, inspired by art works I see in shows or by questions raised in my previous series. I work in 2-3 year series, then change media. For my collage work, I spread out a lot of my original movie posters I have collected for decades & arrange them over & over again until I come up with the theme & the words. The last stage is choosing on the imagery to transpose & stitch over them.

Most of my work, however, is site specific. I am inspired by the specifics of a space—its surroundings, height, length, lighting, acoustics—& come up with a concept that responds to it. I have a profound love affair with big long strapping walls where I can exhibit the scope of my desire. I am fortunate to be invited periodically to hang my work on big public walls in the center of the most trafficked strip of my city.

Visit Eurydice’s work in her shop 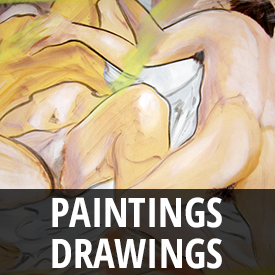 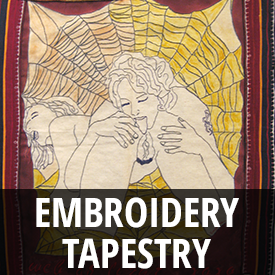 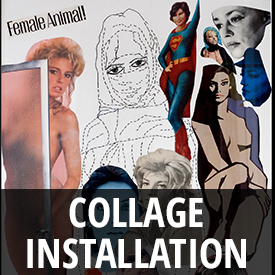 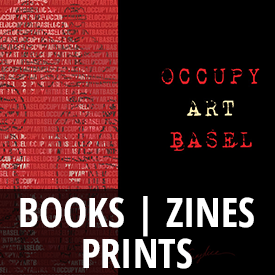